Best of Breed and Group 3 at 1999 Westminster Kennel Club

Award of Merit at 1999 ASSA National

Best of Breed at 2000 ASSA National

Award of Merit at 2001 ASSA National 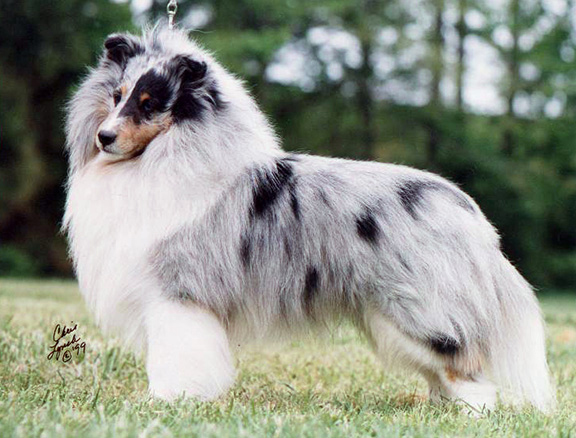 As a shetland sheepdog puppy back in the summer of 1995, Boomer flew to his championship in 10 shows. He finished with a Group 1st placement, a Group 3rd placement, several Best of Breed over specials, a Specialty Best of Winners, and a Specialty Best in Sweepstakes. He has had an extraordinary specials career as well. He took Breed at Westminster in 1999 with a Group 3rd placement. He then went on, later that year, to get an Award of Merit at the ASSA National. He took Breed at both Westminster and the ASSA National the following Year. Despite his prodigious wins and his phenomenal accomplishments, Boomer's career was, unfortunately, cut short of reaching its full potential as Shadow Hill Shelties had other handling commitments at the time. Boomer had to sit out for several show seasons while Shadow Hill campaigned several other dogs, one of whom eventually joined the Century Club.

Being the special sheltie that he is, Boomer came back into the ring he loves after a long absence at the 2006 ASSA National to claim first place in the 12+ Veterans Class under Judge Linda Churchill. This is what she had to say about it:

'Well, it is hard to find the words to describe this Sheltie. He has represented our breed so well in the past Nationals. His style and beauty are still there and I was so pleased to have had him in my Veterans Class. He presents the correct picture in your mind of what the statement in the Standard says about the outline being so symmetrical that no part appears out of proportion to the whole. If you want to develop a picture in your mind of what a Sheltie should look like, picture him standing over a flock of sheep, watching and guarding with the alert, intelligent, gentle, but questioning expression that he possesses. When I judge, I always have that picture in my mind. This dog brought the picture to true life. It was an honor to have him in my ring at the National.'